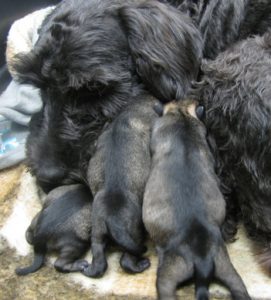 WHY DO VACCINES LAST PEOPLE THEIR WHOLE LIFE, BUT NOT PETS?

Vaccines are licensed based on the minimum duration they can be expected to last. In most cases, we truly do not know how long a pet will be immune from disease. A company cannot get a license for a longer duration unless they have the research to back it up. The only accurate method of proving immunity is to attempt to make a pet ill with an organism. If the pet does not get ill, the pet is considered immune. As you can imagine, this type of research can be costly and difficult to perform long term. However, some research is available and at this time, we do have several vaccines that have been shown to protect for at least three years.
Most vaccines only have a one year license as that is as far as they have been researched. This does not mean the vaccine does not provide immunity for longer than one year.

Measuring antibody levels against disease has proven to be inaccurate in determining protection.

WHY DO PUPPIES AND KITTENS REQUIRE A SERIES OF SHOTS AND HOW MANY DO THEY NEED?

Maternal Immunity: The first milk a mother produces is called colostrum. Colostrum is a rich milk full of antibodies produced by the mother. How long these maternal antibodies last in the body is variable. However, we know they disappear as early as 6 weeks and no later than 16 weeks. Maternal Immunity Interference: While maternal immunity provides excellent disease protection to babies, it has one side effect. As long as maternal antibodies remain in the body, the baby’s immune system will not respond to a vaccine. It is for htis reason that puppies and kittens receive a series of vaccines! 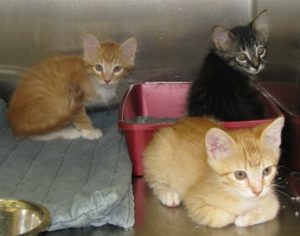 Because we know maternal immunity wanes between 6 and 16 weeks, we start vaccination at 6 weeks and continue every three weeks until the baby is 15 to 16 weeks of age. In this way, we hope to stimulate the baby’s own immune system as soon as it is able to respond.

Booster Effect: Another reason for giving booster vaccines is to create what we call the “booster effect”. If an animal has never been immunized against a disease before, we can create a heightened immune response by giving two vaccines within six weeks of each other. For this reason, if we start immunizations after maternal immunity has waned, we still recommend the pet receives at least two vaccines initially four weeks a part.

CAN VACCINES HURT MY PET?

Some muscle soreness, lethargy and mild fever persisting for a day or two are considered common reactions to stimulation of the immune system. More rarely, a pet may have a true allergic reaction to the vaccine.

Allergic reactions are usually characterized by facial swelling, hives, and extreme facial itching. Vomiting and diarrhea may occur. Since allergic reactions potentially can become worse with each episode, it is important to take heed of these signs as severe reactions can result in shock or even death.